Sofia real draught beer is here. It is in an oasis called Pre Kmeta (“Mayors Pub”). Real beer and microbreweries are rare in Sofia. The big brand beer corporations dominating the market has been the norm for many years. The taste of beer is due for a big change in the beer drinking world in Bulgaria. 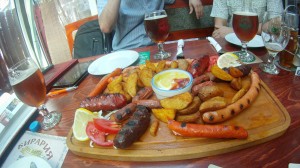 Pri Kmeta (“Major’s Place”), is located just off Raikovski on Paris Street, close to Alexander Nevski Church. The beer is the star here and it seems a shame on a few other places are supplied the beer brewed here.  A quick tour of the brewery was fascinating, but I confess to my thoughts wondering to what the taste of their beer would be like.

I was not disappointed.

The“red beer” was particularly noteworthy. It ia pale ale style and, like all their beers, is unfiltered and unpasteurised. There are four beers, three were on tap on my visit. All are street ahead of the mass produced brands.

Service was helpful, although a little more info on the beers from the waitress would have been welcome. Or just a more in depth description of the beer on the menu.

The upstairs part with its simple wooden seats in a conservatory, looked in need of a refresh. Functional; rather than cosy.

A large 50lv beer keg with your favourite real beer to take away. Good for a home party.

On my visit I felt there were some areas for improvement; more beer information from both the menu and from the waitress would be good, a shorter menu . The beer tour was worthwhile. The BTV story (see http://youtu.be/_9u-oCWLkP4) tells you what you need to know. 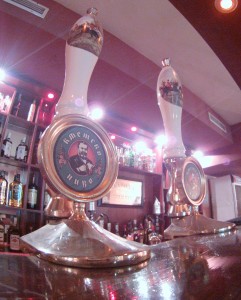 Pri Kmeta. The Beer On Tap

Walking downstairs, Pri Kmeta has an English pub like interior. Due for a refit or makeover — but come here for a decent beer and you will not be disappointed. Investment in Pri Kmeta will make it the place it so richly deserves to be. For the beer, this ia my favourite venue in Sofia. Highly Recommended. 18/20 for the beer, but overall 14/20.

The Bulgarian beer market is ready for change. More interest is being taken in beer, so it is good to see Philip from beers.bg bringing over fine UK, German, Belgium beers to Bulgaria.

Spot on review of Pri Kmeta. I really like the beers (particularly the red), the food is quite good too, but for me the place lacks a certain ‘spark’.

As a start, the staff should all be put through one of the brewery courses they hold.

The place needs some inspirational management, in my view. Crack this, and it would be one of Sofia’s top venues.

When we went there, the place didn’t exist, or had opening hours nobody expects to have a drink. Homepage is dead, too.